A residence with a notable point of difference, this Stylesmiths project merges traditional and contemporary design to create one story in two distinct halves. An extension of the man and Shiba Inu (dog) who lives here, the design brief was to be bold, textured and culturally influenced, with proud references to its humble beginnings.

Situated in a quaint heritage country town, The Stylesmiths™ worked in conjunction with architects to carefully respect the well-preserved architectural features shaped during the colonial period. Encapsulating this historical value was a key consideration, thus the façade was maintained to blend with the neighbouring properties of the same era. Fret-work dresses the front veranda, mimicking traditional cast iron lace, complimented by a fresh coat of paint and simple shrubs. This dainty innocence established the design direction for the first half of the house.

Uncomplicated colours and restrained styling were purposeful decisions made by The Stylesmiths™, to let the structural elements breathe. The Stylesmiths™ worked with navy blues, crisp whites and golden accents in the entry and guest bedroom. Long hanging fixtures lend themselves to draw attention to the original lead-light windows and high ceilings that are naturally star features of this Victorian era home.

Taking cues from the concurrent architectural development that saw the extension of the tiny dwelling to become much more, The Stylesmiths™ assisted with styling choices from beginning to end. Finding a balance that worked within the brief was an exciting challenge, as there was to remain a distinct divide between old and new. The two halves of this residential interior design story needed to exist separately and harmoniously, both representing the client in personality and function. Injected with irrefutable emotion at every perspective, the client’s love of Asian design influenced every decision, reflecting his travel and work via an extensive collection of Chinese furniture, artwork and ornaments peppered throughout. From abstract art to classical bedside tables, there is an eloquent pairing of existing components with updates features has resulted in a delicate harmony, difficult to find in a modern eclectic home.

This unique style is celebrated by Chinoiserie patterned wallpaper in the entry and library. Controversial and admirable, the busy wallpaper is neutralised by the broad Chinese console that sits below, its simple design in dark timber relates to the bird-like figures that dance above. In both zones, golden accessories accentuate the oriental pink hues that shine in the print and tie in with the library’s golden curtains that drape right down to the floorboards. Armchairs are upholstered in a luxurious velvety texture, the royal blue and neutral grey welcoming quiet conversation by the fire.

There are many places to sit in this calming sanctuary, with particular placement of furniture offering up opportunities for dialogue between friends, family and pets. Step down into the sunken recess and you arrive at the dining and lounge, structurally distinct from the kitchen, each space takes on its own identity and purpose. Exuding with opulence and charm is the undeniable hero; the dominating fireplace wrapped in glossy green brick tiles, demands attention, and gets it. All surrounding elements are designed not to compete with the feature, but instead craft a masculine presence via leather upholstery and stormy colours, to round out the space.

Floor rugs and lighting fixtures top and tail each zone, with delicate pendants that hang as functional pieces of art meticulously angled to bounce light and colour around the room – a spectacle for dinner parties to come. To juxtapose the hard, angular surfaces and clean lines of mid-century interior design, organic softness has been introduced via the spheric cocktail bar, circular mirror, rounded kitchen stools, and the rug that centres the library for intimate connection. 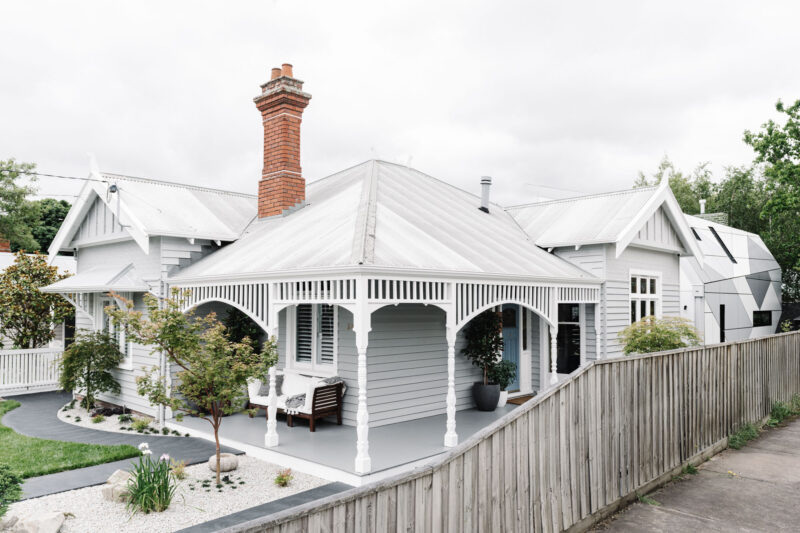 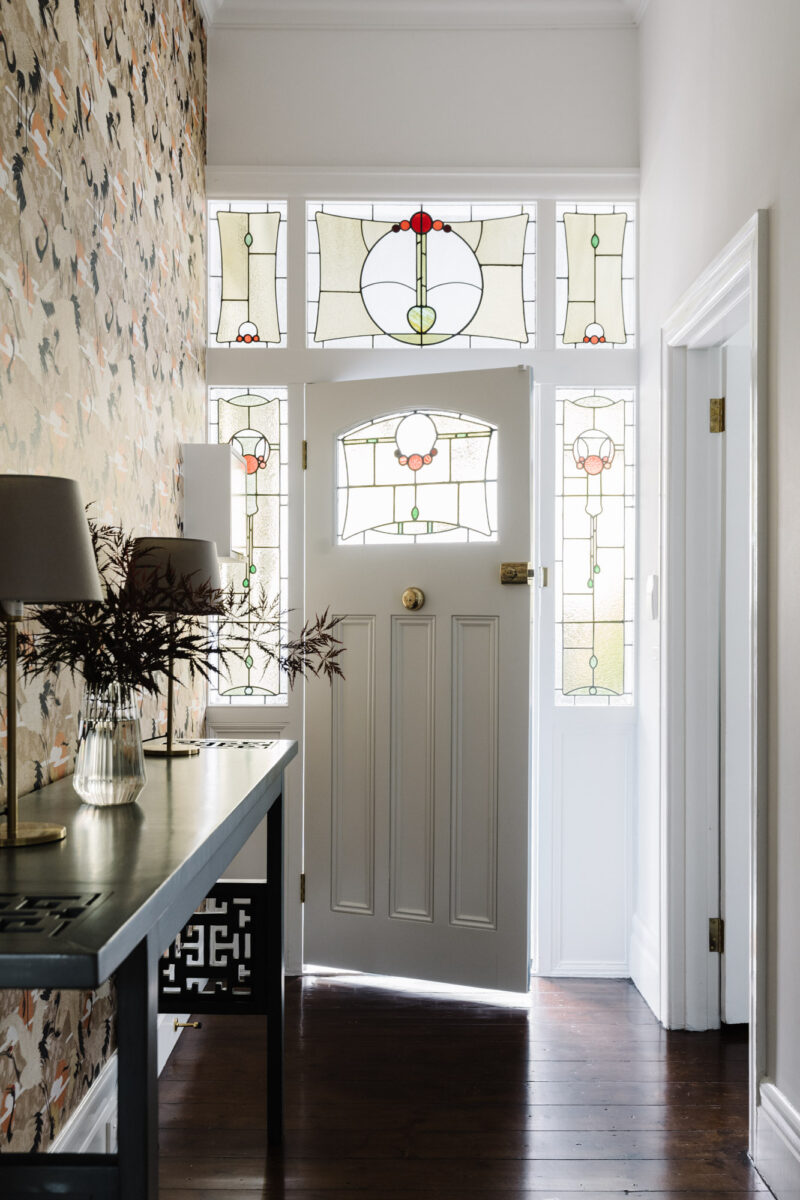 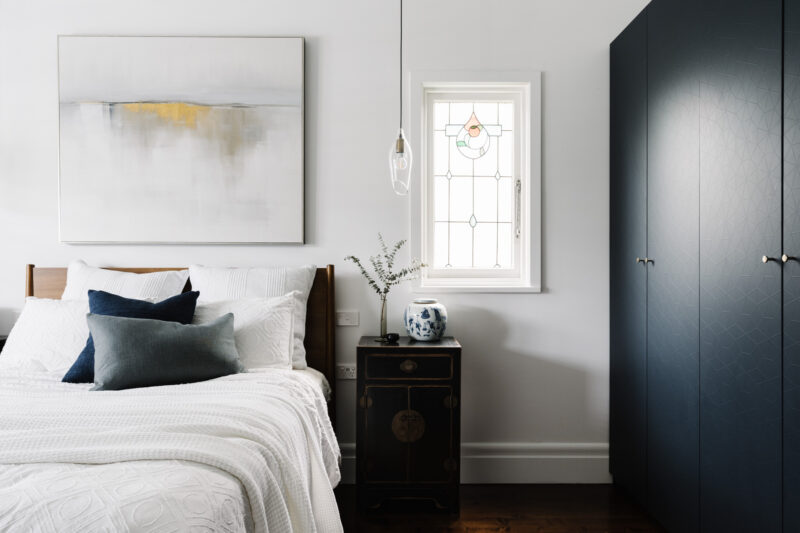 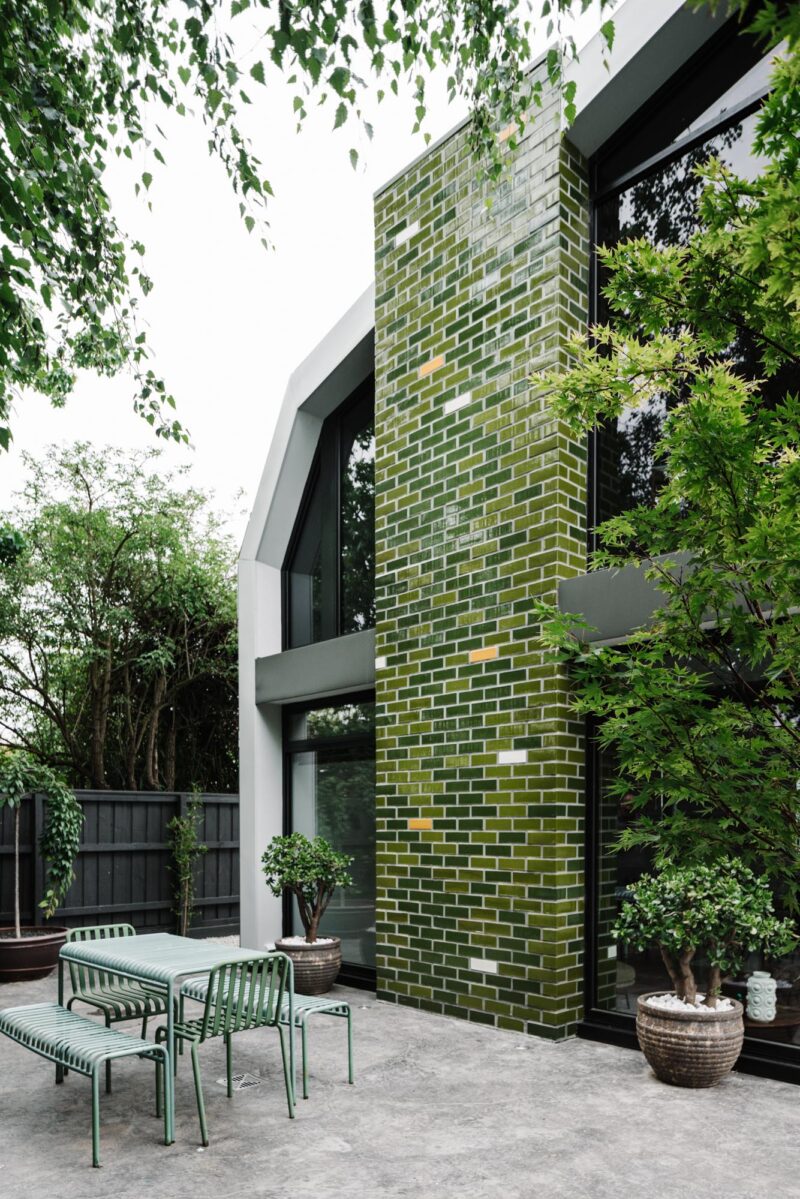 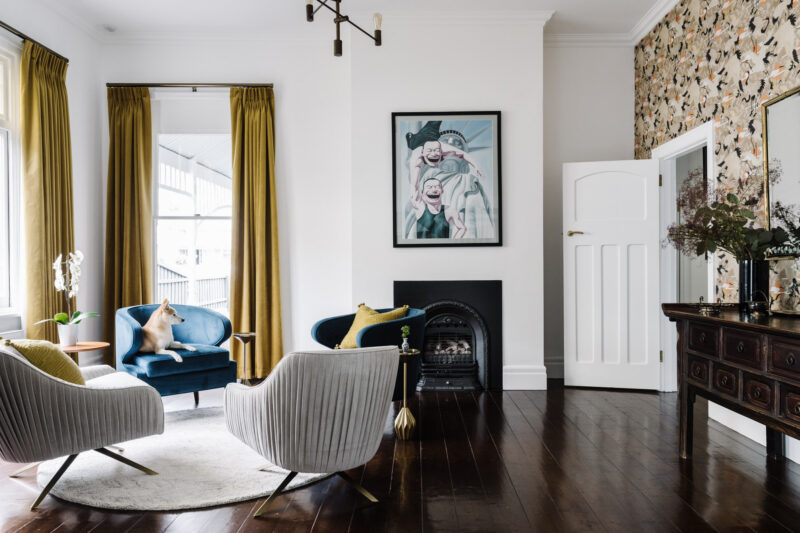 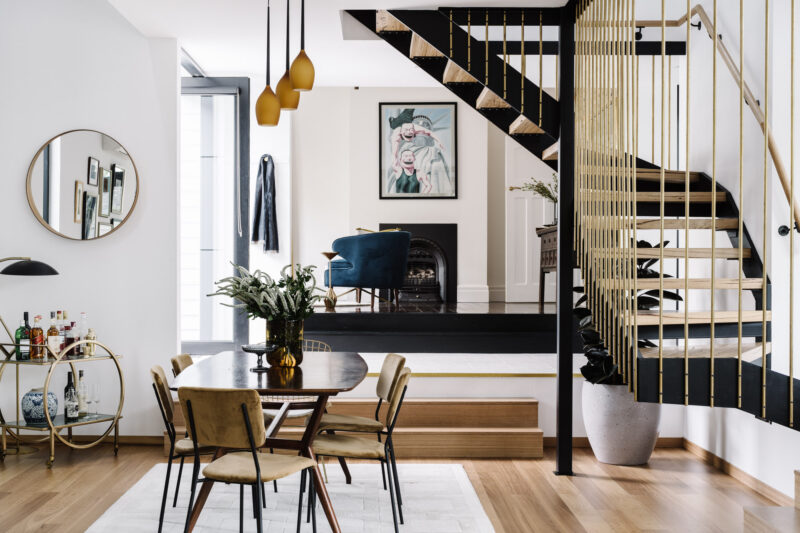 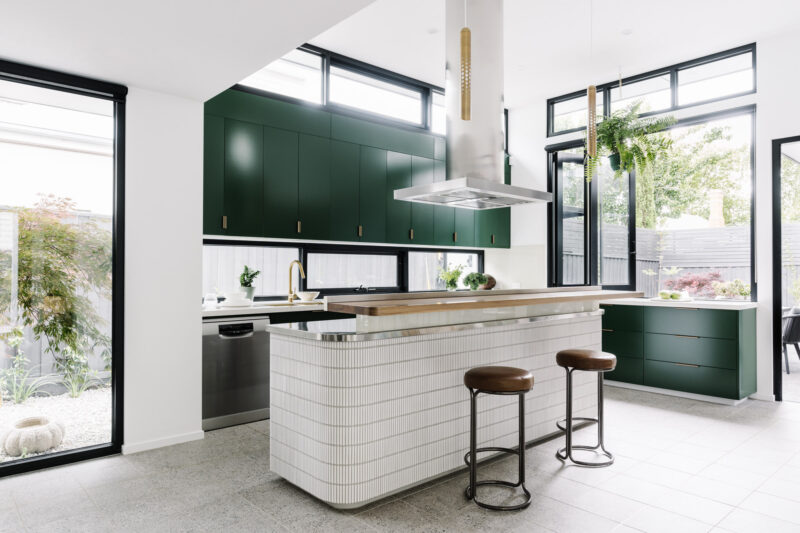 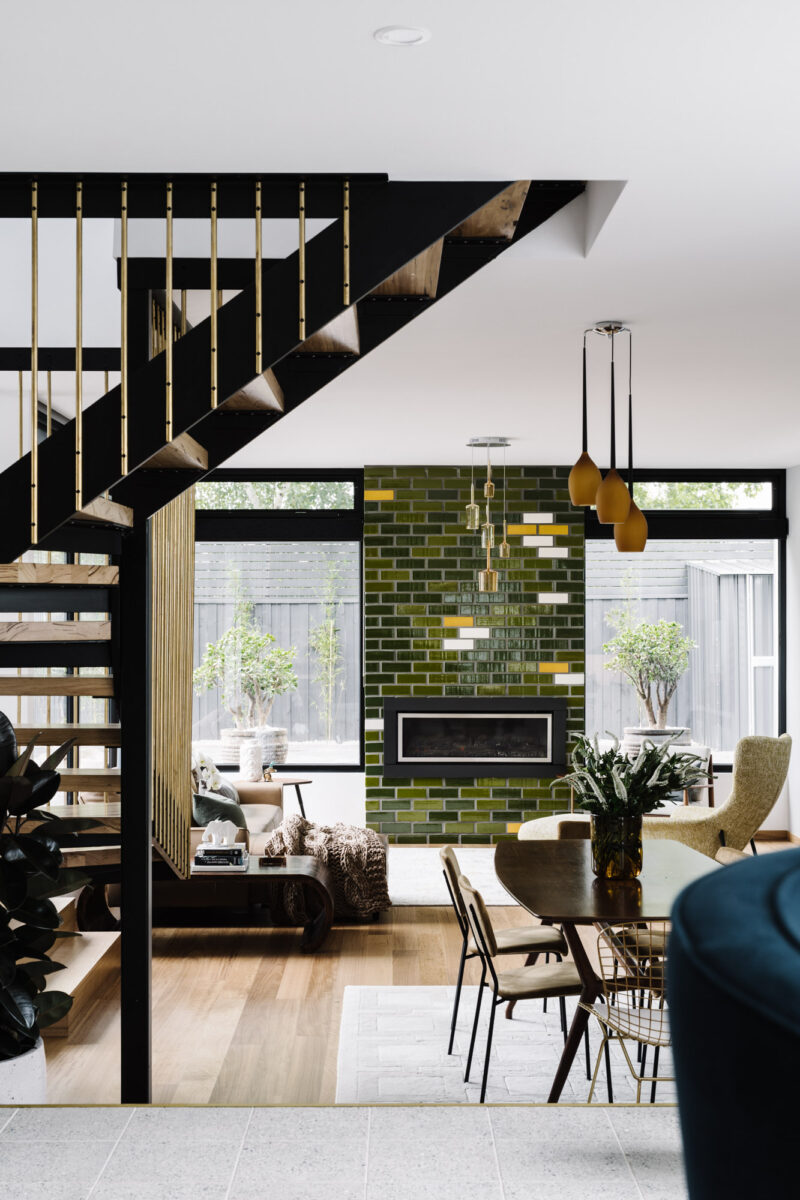 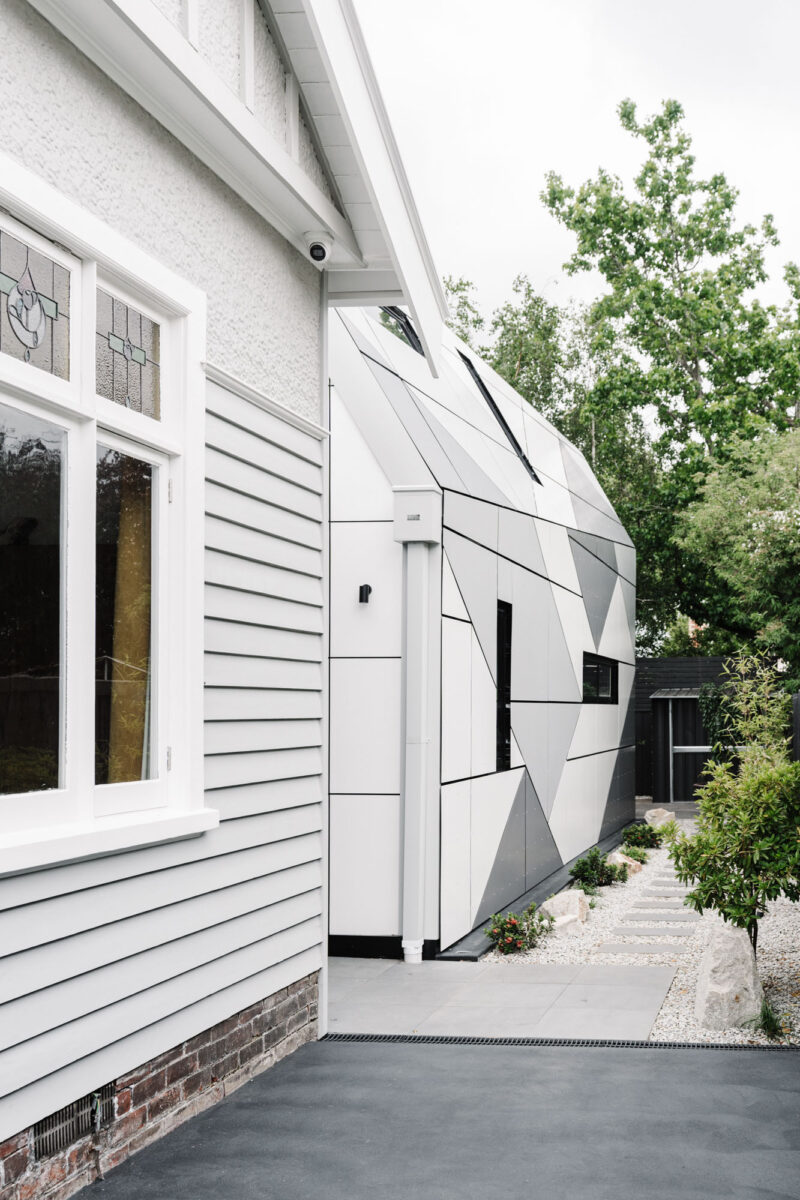 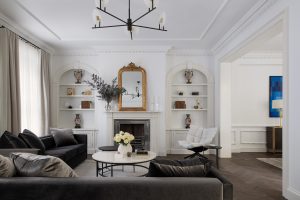 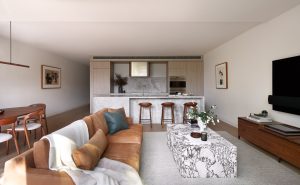 The Stylesmiths™ harmoniously merge quality pieces that are naturally based, warm and organic, to make a new home feel calm, […] 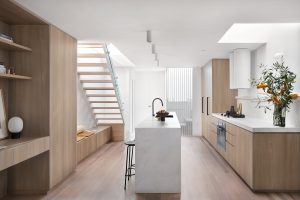 Renovated to improve connection and flow, this two-story unit benefits from the theatrics of light & shade found in contrasting […] 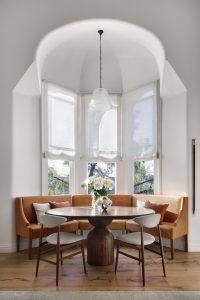 The Stylesmiths™ maximised every inch of the home’s interior by crafting spaces that not only hero the original build, but […]
We use cookies on our website to give you the most relevant experience by remembering your preferences and repeat visits. By clicking “Accept All”, you consent to the use of ALL the cookies. However, you may visit "Cookie Settings" to provide a controlled consent.
Cookie SettingsAccept All
Manage consent